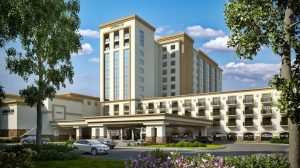 Save the Valley claims the 500,000-square-foot project is not on federally protected trust land and would violate zoning laws with an Indian Casino. The group sued the tribe, its Chairman Vincent Armenta and the tribe’s four-member Business Committee on April 3 in Federal Court.

The Chumash estimate their 12-story hotel-casino with a five-story parking lot will serve 10,000 customers daily and occupy more than 500,000 square feet, according to the complaint.

The project is on State Route 246 near Santa Ynez, north of Santa Barbara.

The property once belonged to the Catholic Church, which transferred it to the federal government in 1938. It is in “a beautiful rural setting in the unspoiled valley behind Santa Barbara,” the group says.

“The tallest building currently in the Santa Ynez Valley is three stories,” according to the complaint. “There will be an enormous and oppressive impact on existing infrastructure for the Santa Ynez Valley and its residents.”  The tribe claims the property is in federal trust and not subject to nontribal zoning laws, but the citizens group claims the federal government never took it into trust.

Save the Valley claims the hotel Indian casino expansion will be on land the Catholic Church once allowed tribal members to use for “domestic” purposes, including irrigation and watering livestock.

The church in 1897 filed a quiet title claim to the property and prevailed in 1906, the group says. After the Catholic Church won its quiet title, it allowed tribal members to continue using the land, but the 1906 judgment in Santa Barbara County Superior Court placed additional restrictions on the land’s use, according to the complaint.

“These additional restrictions directly impacted, adjudicated, and decreed that the U.S., the Santa Ynez Indians and any descendant who might occupy the real property in the future were forever barred and enjoined from claiming any right, title and interest in that land beyond the right of occupancy and for residential use only,” the group says.
“That judgment was not appealed, nor was it later modified in any way. Unfortunately, the defendants have decided to disregard their obligations under the judgment and covenants running with the real property. In particular, this project on the real property is a violation because it is not even remotely a domestic or residential use but rather a purely commercial endeavor.”

When the Catholic Church transferred the property to the federal government in 1938, the same restrictions were included in the quitclaim deed, according to the complaint.  No Indian Casinos Are Permitted.

Save the Valley seeks a permanent injunction against the Indian casino expansion and declaratory relief that the tribe and land remain bound to the court-imposed restrictions and local zoning laws.

The group is represented by Matthew Clarke, with Kelley Clarke PC, of Santa Barbara.